Eye patients in Seychelles will in the near future enjoy improved eye care services in terms of screening and surgery now that the government has partnered with Teaching Eye Surgery Foundation and Save Our Sea Foundation based in Switzerland.

Initiator of the project, founder and president of Teaching Eye Surgery Foundation (TES), Professor Cyrus Tabatabay, accompanied by a delegation from the Ministry of Health led by Minister Jean-Paul Adam and Save Our Sea Foundation (SOSF) representative Laurent Moser, paid a courtesy call on President Danny Faure at State House yesterday morning.

President Faure was briefed on the future modernised project and the ongoing progress being made in the eye care services being offered at the clinic since TES partnered with the Ministry of Health in 2016.

The project will include a modern ophthalmology unit of which its renovation at the Yellow Roof will see an upgrade operating centre and a lift which will be financed by SOSF while TES will be financing equipment and training of technicians.

Seychelles will outsource technicians for training on the new equipment.

In a press conference following the courtesy call on President Faure, Minister Adam said the project for the eye clinic is in fact vying for the highest possible standard  for eye care in Seychelles.

He added that services being offered at the clinic since the introduction of new state-of-the-art equipment, are at a higher level compared to some countries where some Seychellois go for the same treatment.

He noted that with eye tests and treatment being able to perform here, this will cut down on costs for sending patients overseas for treatment.

He hailed the work done by the local staff and thanked TES and SOSF for the partnership.

Last year, Professor Tabatabay, through his foundation, donated a state-of-the-art Optos machine that takes photos which can show a large format of the retina located at the back of the eye and for a close-up analysis results available in just 30 seconds as compared to other machines which take more than 10 minutes.

Dr Roland Barbé, consultant in-charge of the ophthalmology unit, who along with members of his staff have benefited from training from TES, said with the introduction of this new piece of equipment donated by Professor Tabatabay, the clinic has since 2016 been able to conduct around 5,000 examinations to detect diabetes and hypertension in the eye and 130 eye cataract operations.

He noted that the success of the partnership comes from the 90% of the clients coming for services at the clinic who are satisfied with the outcome.

Professor Tabatabay, assisted by Dr Barbé, performed the first vitreoretinal surgical operation on four patients last year and on three other patients this year, an ongoing practice which Dr Barbé said will gradually cut down on the 40 plus patients the ministry sends to India for vitreoretinal surgery.

Dr Barbé said that glaucoma, cataract and diabetes in the eyes are the most common factors of eye illnesses in Seychelles.

The SOSF protects our oceans by funding and supporting research, conservation and education projects worldwide, focusing primarily on charismatic threatened wildlife and their habitats.

Mr Moser said his organisation is very happy to have joined the partnership which will be to the benefit of the Seychellois people.

TES is based in Geneva and has among objectives to help countries through training local surgeons whose citizens are facing serious eye problems.

Its president, Professor Tabatabay, said with new eye technologies available in Seychelles this could in the future help to prevent the number of people with prevalence to be diabetic, to lose their eyesight.

Also present during the briefing at State House were the chief executive of the Health Care Agency, Dr Danny Louange, three ophthalmology nurses and SOSF representatives. 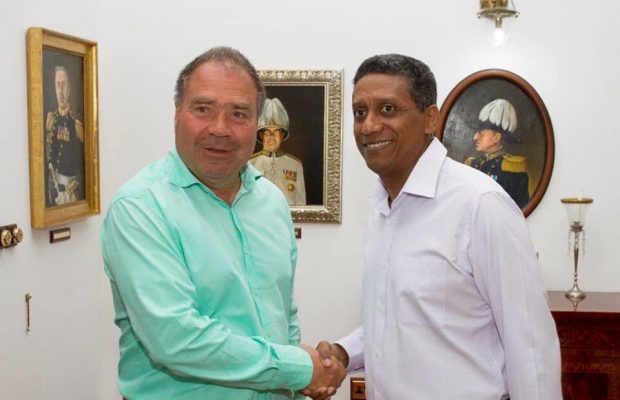